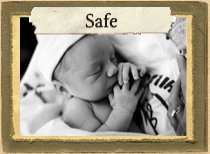 Midwives provide prenatal, labor, delivery, and post-partum care for LOW RISK pregnancy. A sound screening process is one way to ensure that only viable (healthy) candidates are offered a home birth, lowering the potential for emergent issues at delivery significantly.

Working in concert with a consulting physician and a lab, midwives can offer the same screening that an OB would do. This includes standard tests like ultrasounds, diabetes screening, and Group B Strep tests. The midwife reserves the right to refer a woman’s care to a doctor at any time if it is determined that she is no longer low risk, or if it becomes apparent that she is not a good candidate for a home birth for any reason.

There is overwhelming evidence of the safety of home birth corroborated by many studies. (Click this link to see the two+ pages of studies supporting home birth as a safe option.) In fact, the percentage of perinatal and neonatal death is actually lower at home than in a hospital. Comparing apples with apples, this may be because hospitals handle high-risk pregnancies, and midwives do not. Still, when comparing matched births (matched by maternal age, number of previous pregnancies, socioeconomic status, education, and risk factors), meaning that the initial risk of the births were exactly the same, babies were more likely to need resuscitation, have infections, or have birth injuries at a hospital than at home. With regard to the Mother’s health, Moms were more likely to have hemorrhages, and high blood pressure at the hospital than at home. In matched cases, mothers were three times more likely to have a Cesarean when giving birth at a hospital than when giving birth at home. (Some home-birth couples had to be transported to the hospital for C-sections.) It should be noted that with all of the studies indicating home birth is safer than hospital births, there is only one study that would suggest that home birth is not safe. This study did not separate unassisted and unplanned home births from Midwife attended home birth. The data from the study in question actually shows that Midwife assisted home birth is as safe (and in some cases safer) than hospital birth, (if statistics from births where no medical personal are present is removed from the equation).

In a small percentage of cases, a birth that is begun at home must be transported to the hospital. The majority of transports are for non-emergency issues, such as failure to progress, or a mother’s preference (because a Midwife will take you to the hospital if you change your mind). In these cases, the issue for which transport is initiated is easily addressed and time is not of great concern. A few cases are for serious emergencies in which the health of the mother or baby is at risk. A call to the hospital en route speeds the time for appropriate treatment, because the OB Floor is prepared for your arrival. For these cases, the State of TN requires that a Midwife have an Emergency Plan in the file of each client, so that this rare need to transport is addressed in advance. There is a clear protocol for what to do in each case. This process can help a potential client to evaluate her particular situation to determine if the emergency plan adequately addresses her concerns about potential emergent issues.

The Transport rate for Tender Beginnings Birth Services over the last 20 years is 15%.  However, that has dropped drastically.  In the year of 2015 the transport rate was 5%.