Second Time not Plan B 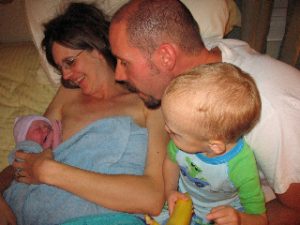 It was Thursday evening, May 21st, I was 39 weeks 2 days pregnant. We were having a nice family night together, just the three of us. After dinner we took a walk around our neighborhood. We walked past Casey and Kelvin’s house and they were outside. Casey joked with me to keep walking until labor started. Little did we both know that it would just hours later! After our walk we drove up to the frozen yogurt shop at the mall for a nice treat. We sat outside at the water fountain eating our yogurt and taking turns sharing it with Ronnie. Then we stopped into Gap and found a few cute shirts for Ronnie for $1.48 each. I love bargains like that!

We got back home and put Ronnie to bed. I checked e-mail and Facebook and did a few things around the house. I was not very tired actually, my mind was preoccupied with the thought of labor. I just couldn’t shake it from my head. I finally laid down in bed just before midnight. And almost as soon as I laid down, I began to feel mild contractions. I could tell these were different than the Braxton-Hicks that I had for months. These felt more like “real” contractions. Since I was wide awake anyway, I decided to watch my clock and time them. They started out around 6 or 7 minutes apart, then went to 5 minutes, then 4, then 2 minutes. After about an hour and a half of that, I thought maybe I should call my midwife, Mary Anne, just to let her know what was going on. They were not super strong, but they were quite regular, and to me they felt like they were progressing. It was about 1:25 am when I called her. We talked for a bit and she told me that early labor can go on for quite some time. But if I wanted her to come, she would come anytime. And she would just sleep on our couch if nothing came of it. She also told me it was not the space between them that mattered, but how long they lasted. She told me to try to time one and then get some rest if they are less than 40 seconds long. Since I was talking to her through my contractions, she figured this was early labor and not much was going on. 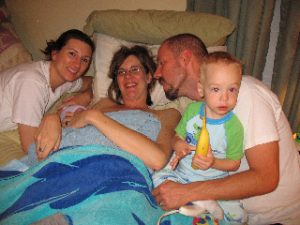 I found the stopwatch feature on my cell phone and laid back in bed to time them. The first one was 53 seconds, and it was getting a bit more uncomfortable, especially laying down. So I went and sat on the toilet to see if that felt better for me and continued to time them. I got a couple of them over a minute long. But I was not sure how many of those I needed to have to be considered “progress”, and I was hesitant to call Mary Anne back right away since it was the middle of the night. Surely I wasn’t progressing that fast was I?

Ron was not able to sleep anymore since I was up with contractions and had already called Mary Anne once. So he started getting the house straightened up and ready in case this was it. About an hour had passed since I first called Mary Anne, and the contractions were stronger now, to the point where I had to stop and hold on to something through each one. So I called her back, and had a contraction while we were on the phone, that was all she needed to hear and she was on her way. This was around 2:35 or so. She has a 40 minute drive to get here. 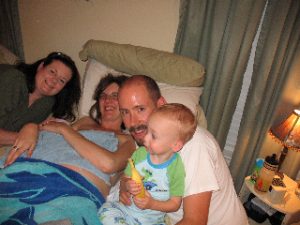 Now, I do not really know the times that things occurred after this, simply because I was a bit preoccupied with labor to even think about looking at a clock!! I would say about 10 minutes after I got off the phone with Mary Anne that my water broke. I was standing near the computer desk and suddenly it just gushed! And I felt immediate pressure and felt very “pushy”. I knew that baby was coming! I quick ran to the bathroom and sat on the toilet. Ron was in our bathroom cleaning out the bathtub, he had no idea what had just happened. I remember being very grunty and pushy with each contraction, almost like I had to hold baby in! I cried out “help me Jesus” during the contractions, that was all I could say or pray at that moment. Ron came out of our room and saw me in there, I told him my water had broke. He asked me what I needed and what he could do. I told him to draw up the bath water for me so I could get in there. He ran back into our bathroom and started filling the tub with water. Now, I knew that the baby was coming right away, but Ron didn’t. And I never thought to say anything to him, I guess I somehow thought he would know. But how could he unless I told him? LOL! I somehow managed to walk from one bathroom to the other, and grabbed my cell phone on the way, in between contractions. Once I was in the tub, on my knees, Ron asked me what else I needed. I asked him to mix me up some sports drink. So he went into the kitchen to do that. I dialed the number for my neighbor Casey. She was planning to be at the birth anyway, even in the middle of the night. She is a nursery nurse at our local hospital. So her job is to take the baby right after the OB catches it, and do the newborn exam. She had never experienced a homebirth before and was looking forward to it. I was only able to let her phone ring twice and I had to hang up because another contraction was coming. And I had to push with this one! Suddenly the head emerged, I was amazed! I said “help me Jesus” again, and then I pleaded for baby to be okay. Right after that, Ron came in with my sports drink. I told him the head was out. He looked and said “okay, now what?” LOL! Must have been a shock to him! I told him the body would come out with the next contraction. Sure enough, with the next contraction I pushed out the rest of her body. I scooped baby up with my hands and onto my chest. And I started rubbing her back to stimulate her. She cried right away. During this time, Casey had been trying to call me back. So after baby was born, Ron got Casey on the phone and told her what had happened and asked her to come over. I sat there holding her to me, rubbing her back and listening to her cry, completely amazed at what had just happened! Then I realized I had no idea if I was holding a boy or a girl! I couldn’t pull her up too high because of the cord. So I lifted her leg off to the side and I had to look twice because there was no “thingy” there! It was a girl!!! I was surprised!!

Casey arrived within minutes, she had her stethoscope with her, and got the bulb syringe out from my birth supplies. She suctioned the fluid out of baby’s mouth and nose, and listened to her heart and her breathing. We got Mary Anne on speaker phone so she could talk to us and instruct us about what to do next. Poor Ronnie had woke up during all this commotion, so Ron tried to rock him back to sleep, but he was fighting it. I told him to just let Ronnie get up and see me, then he would be okay. By that time Casey had helped get me to the toilet with a chux pad under the seat in case I delivered the placenta. Mary Anne would need to inspect it to be sure it was all intact.

Mary Anne arrived about 20 minutes after the birth a 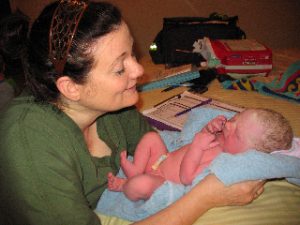 nd immediately went to work. They got me moved from the toilet to the bed to deliver the placenta. She gave me some herbs that help get contractions going to get the placenta out. And that worked within minutes. (Just a side note here, midwives do NOT pull on the cord to get the placenta out, that causes a lot of the problems that happen in hospital births) Then Ron cut the cord and I put baby on my chest and straight to my breast to start nursing. She latched on like a pro! 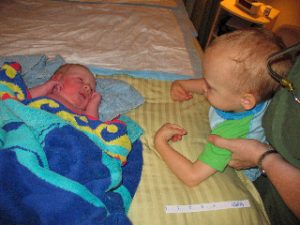 Everything checked out well for both baby and me, and Ronnie was just happy to see mama and be with us. It was actually quite special that he was up during that time. Mary Anne and Casey left the room for a little bit to give us some alone time as a family, that was neat.

Later on in the day Ron and I were discussing what her name would be. Since we had her at home, we did not have to have a name immediately, we had 7 days to decide. We had plenty of time to look at her and see what name she looked like. Then we decided she was an Elise. Which is a short form of Elizabeth, which means “consecrated to God” And Mae is her middle name, which is my grandma Geurink’s middle name as well. Mary Anne came back later that evening to check on us, and we were able to give her Elise’s name for the birth certificate. So Mary Anne filed that for us. 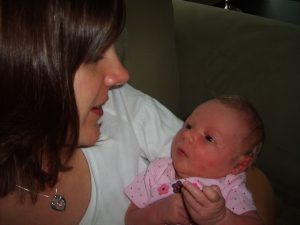 So, from first contraction to birth was 3 hours. Completely amazing, and a bit unexpected. That is how our planned homebirth turned into an unplanned, unassisted birth. 🙂