I had an acupuncture session every single day during the week leading up to the baby’s due date. I was really, really hoping that with the combined efforts of the chiropractor and the acupuncturist, I would deliver before the due date rather than after because it is REALLY hot in Tennessee during the month of August. On August 5th, the actual due date, I had a 2-hour long acupuncture session, and I had lots of contractions during the two hours. I just figured those were the same Braxton-Hicks contractions I had experienced during previous sessions that week. After I left the acupuncturist, at 1:30 pm, I went to eat lunch, and I had an unusually insistent and strong contraction in the parking lot at 1:38 pm. I noticed the time because it was such a surprising contraction!

I had another contraction an hour later, but until around 10 pm, the contractions were regularly an hour apart, so I didn’t think much about it until I noticed they started coming more frequently. At midnight, I told my husband, Andy, to make sure our four year-old daughter, Vivienne, was sleeping in her own bed tonight because I was pretty sure the baby would be arriving sometime during the night. My contractions began to be serious ones about 15 to 20 minutes apart around 1:30 am, but I really wanted to try to rest since I had been awake since early the previous morning. No rest was in my immediate future, however, because the contractions were keeping me awake.

Andy suggested I call Mary Anne to give her an update about 3 am because the contractions were becoming difficult to talk through, and we wanted to make sure we gave her enough warning because she was in Franklin, which was almost an hour away. Mary Anne asked me how far apart the contractions were, and I said I was measuring them from peak to peak and they were about 10 minutes apart. She let me know that I needed to measure them from beginning to end, instead of “from when I thought I would die to when I thought I would die,” which is how I was measuring them! She said to call back after about an hour to let her know how they were really coming. I called back, and I still measured them wrong because I was measuring the time between each separate contraction’s beginning. She very nicely and patiently explained to me again how to measure the contractions, and she told me to try to get some rest, too.

I spent the hour or so it took Mary Anne to get to my house bouncing through the contractions–I was holding on to the doorframe in my bedroom while bouncing my knees. I kept this coping movement up while Mary Anne and Andy got everything together for the birth, particularly the birthing tub. Lindsay got there sometime during the 45 minutes or so they took to get everything set up, and Mary Anne came to check me for my progress. The contractions were coming pretty fast, sometimes less than a minute apart, but they were short in duration. We discovered that I was already at 8 cm, so Mary Anne said I should get into the tub to help slow down the contractions so I could get some rest in between them.

Getting into the birthing tub was the best thing I ever did in my life at that point! It was about 7 am, and I was finally able to rest between the contractions, which were substantially longer and stronger by then. I was worried about whether or not I would know when to begin to push, but when the time came, I knew I felt differently, and so I started to push. When I was having some trouble with the pushing, Mary Anne realized it without me saying anything about it, and so she had Lindsay help me figure out where I needed to focus my pushing by having her press on the muscles I needed to maximize the pushing effort.

Mary Anne’s extensive experience as a midwife was most clear and powerful to me when I told her that I felt a burning while I was pushing. She said that the baby’s head wasn’t down far enough to be causing that sensation, and she told Lindsay to be on the lookout for a nuchal hand. I turned around to put my back against my husband and the side of the tub and began pushing in earnest. I didn’t even notice that Mary Anne had coordinated the silent entrance of my daughter and mother into the room so that they could be present when the baby was finally born. When the baby’s head crowned, I heard Lindsay say, “I’ve got a hand!” The fact that Mary Anne could take the small detail of the early burning and predict the nuchal hand was just amazing to me, and I still can’t believe I had no idea that my mom and daughter were in the room when I delivered!

The nuchal hand delivery meant that I sustained some small tears that produced a lot of blood and some significant pain, so I wasn’t able to really lower myself down onto the floor of the tub. Lindsay caught the baby and placed it on my chest for me to rest and figure out whether we had a boy or girl baby. My baby hardly cried at all until I asked someone to please come lift the baby up for me because I was using my hands to keep myself from touching the floor. Andy lifted the baby up for me to see that we had a baby boy! We were actually pretty lucky that he is a boy because we didn’t have a girl named picked out! 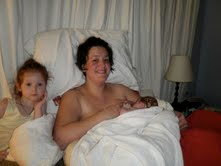 My father showed up while Luke and I were working on our first nursing session, and he held Luke and facilitated introductions between Luke and his sister in another part of the house while Mary Anne repaired my tears with some very skilled stitching. When she finished the suturing, she called my father, Luke, and Andy back into the room and gave Luke his first exam. At that point, she had me pile into the bed (with the appropriate protective covering that she and Lindsay had set up) with Andy and the kids, and then Mary Anne and Lindsay left us, happy and in our own bed.

I hardly have the words to express how profoundly I have been affected by the home birth I had with Mary Anne. My first birth was in a hospital where I was micromanaged and, in my mind, tormented during the whole experience, so that when I was finally “allowed” to push, I was so exhausted that I couldn’t really manage it. My doctor ended up using the vacuum to deliver my daughter, and I had a great deal of guilt about the way I hadn’t protected her or myself in that experience. While I clearly can’t change the experience I had in the hospital delivering Vivienne, I was able to heal some of that trauma through the experience I had delivering Luke at home. I felt supported, empowered, and yet still protected by Mary Anne and her expertise, and because of my home birth, I feel like I can let go of the guilt and shame wrapped up in my first birth experience because of the calm, caring, and family- and woman-centered care Mary Anne and Lindsay gave me during Luke’s arrival in the world. I think I am a more confident mother and a more confident woman in general because she helped me trust my body to accomplish a perfectly healthy and natural home birth.