On Tuesday morning, January 8th, I woke up and thought, “You know what? I’m going to lay in bed and read all day today. I’m over 9 months preggers; I have that right!”

And so I did. I laid in bed and read “The Casual Vacancy” by J. K. Rowling (love her), drank copious amounts of water, and slept whenever the mood hit me. My husband had been leaving work early for the past week, just in case it was “baby go time,” and he arrived home around 2 PM.

“Have you gotten up at all?”

“Nope, just laying here in my jammies.” He smiled, kissed my head, and retired to our home office to get some work done.

I had been feeling Braxton Hicks for the past three months, so I thought that was what I was experiencing around 5 PM, and I got up to go to the bathroom. My husband was still in the office down the hall, and I almost called him to the bathroom, because something felt different. At this point, we were only four days past our guess date, and I was expecting to wait a little longer. But I thought, why not, we’ll time these pressure waves and see what happens.

I can’t remember now the time they were apart, but they were pretty regular. But at 6 PM a strong one hit, with more pressure than the others, and I called Patrick into the bedroom.

“I am pretty sure we are in birthing time.” We called Mary Anne (my midwife, the best midwife EVER) around 7 PM, because my pressure waves were six minutes apart, lasting 45 seconds to 1 minute each time. She said to get ready for bed, the waves might start getting further apart, letting me sleep, until the next day, when they would pick up again. Which kind of bummed me out. I was ready to meet my baby (and figure out if little Baby Cakes was a girl or boy!).

Right after we called Mary Anne, our doorbell rang. We had visited a new church the previous Sunday, and the pastor thought it was a good time for a visit! Patrick went outside to chat with him while I sat and rocked my hips on my birth ball. They spoke for two pressure waves. When Patrick came back in, I asked, “Did you tell him your wife was having a baby?”

“No… I wasn’t sure if you actually were.” Which made me laugh pretty hard, until the next pressure wave came The next time I went to the bathroom, my mucus plug came free, but with no streaks of pink or red. In fact, I had no bloody show at all until my baby was born.

Around 11 PM that night, it felt like my pressure waves weren’t stopping. Almost as if they were continuous. I had Patrick call Mary Anne again, because I had been expecting to go to sleep for awhile, and obviously that was not happening.

Our phone call was not really informative to Mary Anne, because I couldn’t tell when the pressure waves were starting and stopping. My legs had also began to shake pretty hard (did not realize that was important at the time). So she decided to come over and check me out to make sure everything was alright.

I tried to lay down again, but each wave hit, and breathing and relaxing through it with a bit of panic (I was convinced something was wrong), was becoming very hard. Mary Anne arrived, and instant calm went through me and our house. That’s just how she is. She has this aura of “I know what I’m doing and everything is going to be alright” about her.

She checked me in our guest room as soon as she arrived, around 11:30 PM. I was at 9 cm and the baby was at +2 station. And my legs shaking, she said meant the baby’s head was in my pelvis. At this point, she told my Patrick we needed to get the pool filled immediately, and she called her assistant, Lindsey, to come on over.

I was almost laughing at this point, and time started to really fly for me. I laid on our guest room bed until they told me I could sit in the pool if I wanted, breathing through all my pressure waves. Excited, anxious, happy… I had so many emotions running through my mind!

In the birthing pool (set up in our baby’s nursery), I immediately felt the pressure in my pelvis relax somewhat. The warm water was amazing. Our hot water heater gave out, so they had coffee pots and pots boiling water on the stove to fill it up. Another laughable moment. 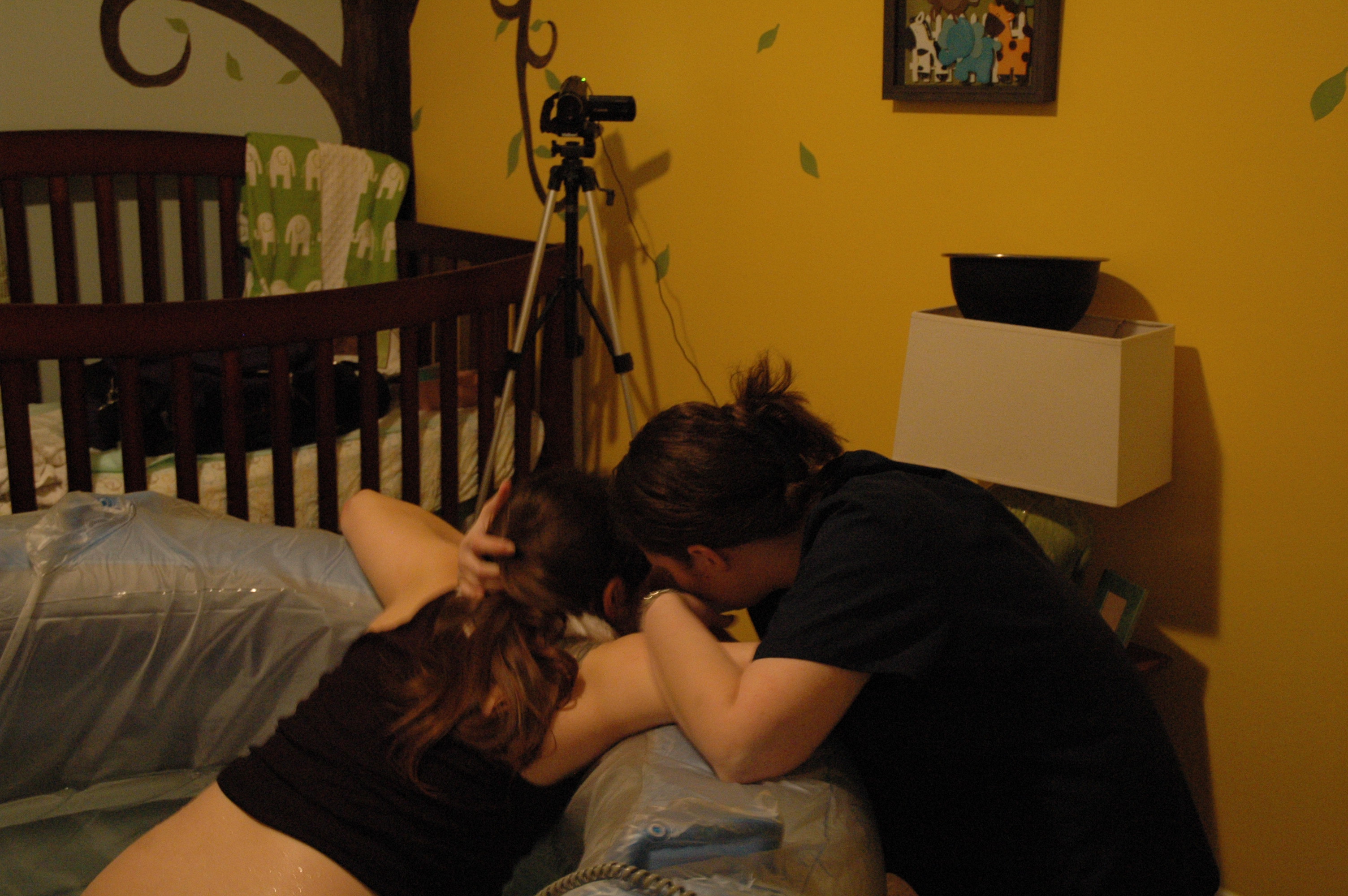 Lindsey was taking my vitals and checking the baby, while Mary Anne set up emergency only things and after birth supplies. I felt so at ease with them there, and knew everything was going to be ok.

There were a few moments in the pool when I felt too hot, and they brought me a cold wash cloth. They also were reminding me to drink the water and gator aid they brought to me. I began to feel nauseous around the first time I felt the need to push, and asked for a bucket. But pushing took away the urge to be sick. I fought the need to push at first, because honestly, it felt like I was going to poop. As soon as I told them that, they laughed at me, said, “It happens,” and showed me the net that solves that problem. 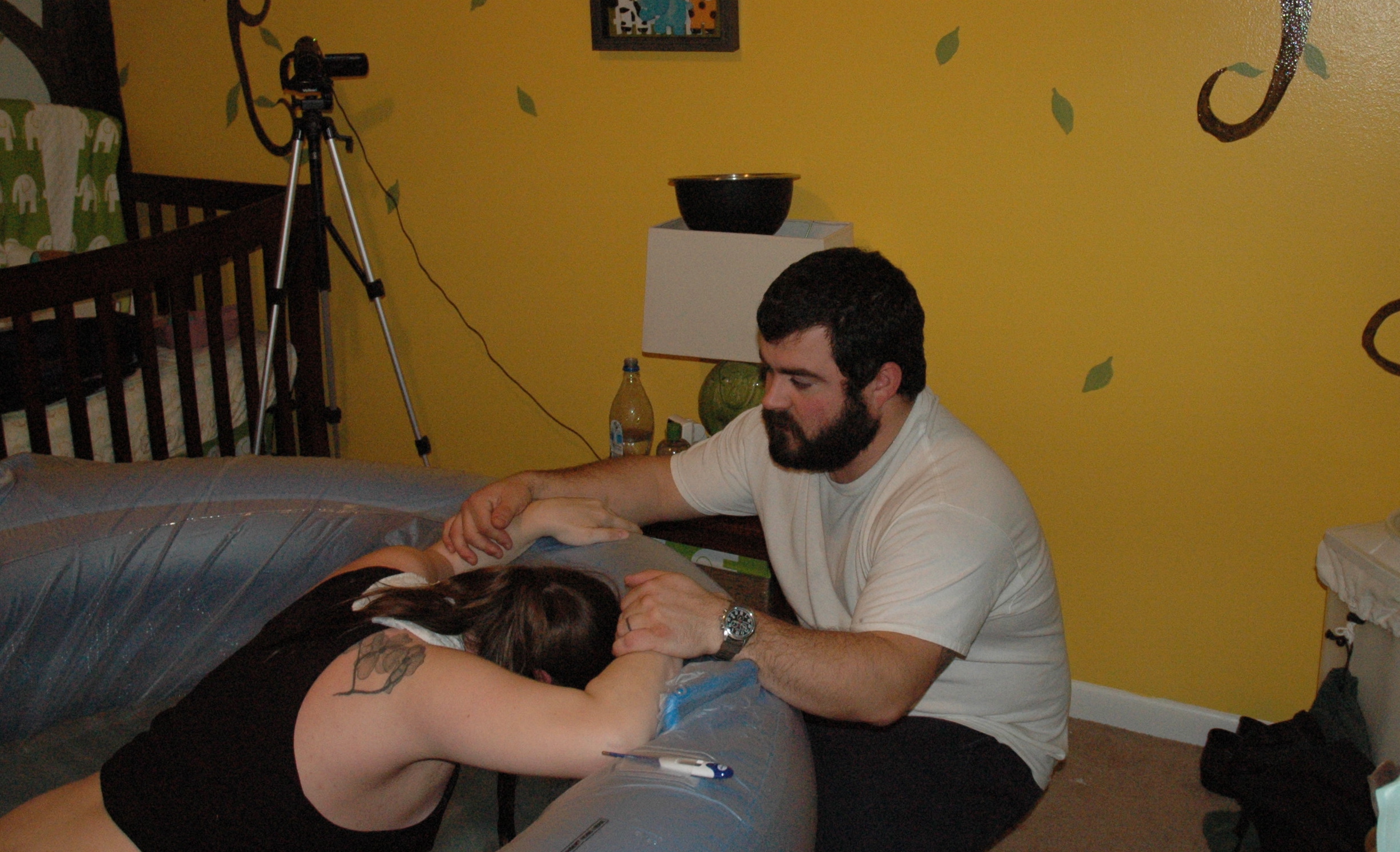 So I pushed in earnest. I got on my knees, legs spread, held onto the handles of the pool, and really pushed. Soon, Lindsey told me I could feel the head, but I was so focused on pushing the baby out, I didn’t even want to stop to feel. My husband, at this time, had become what I was holding on to, concentrating on, to bring our baby into the world. Lindsey said, “We have a head out!” and with the next push, the baby was here, at 2:54 AM on January 9th!

I felt as if only an hour had passed since Mary Anne had arrived.nbsp; Hypnobabies had me trained for that. One of the mantras is that every twenty minutes will only feel like five minutes to you. And it did. Trust me. 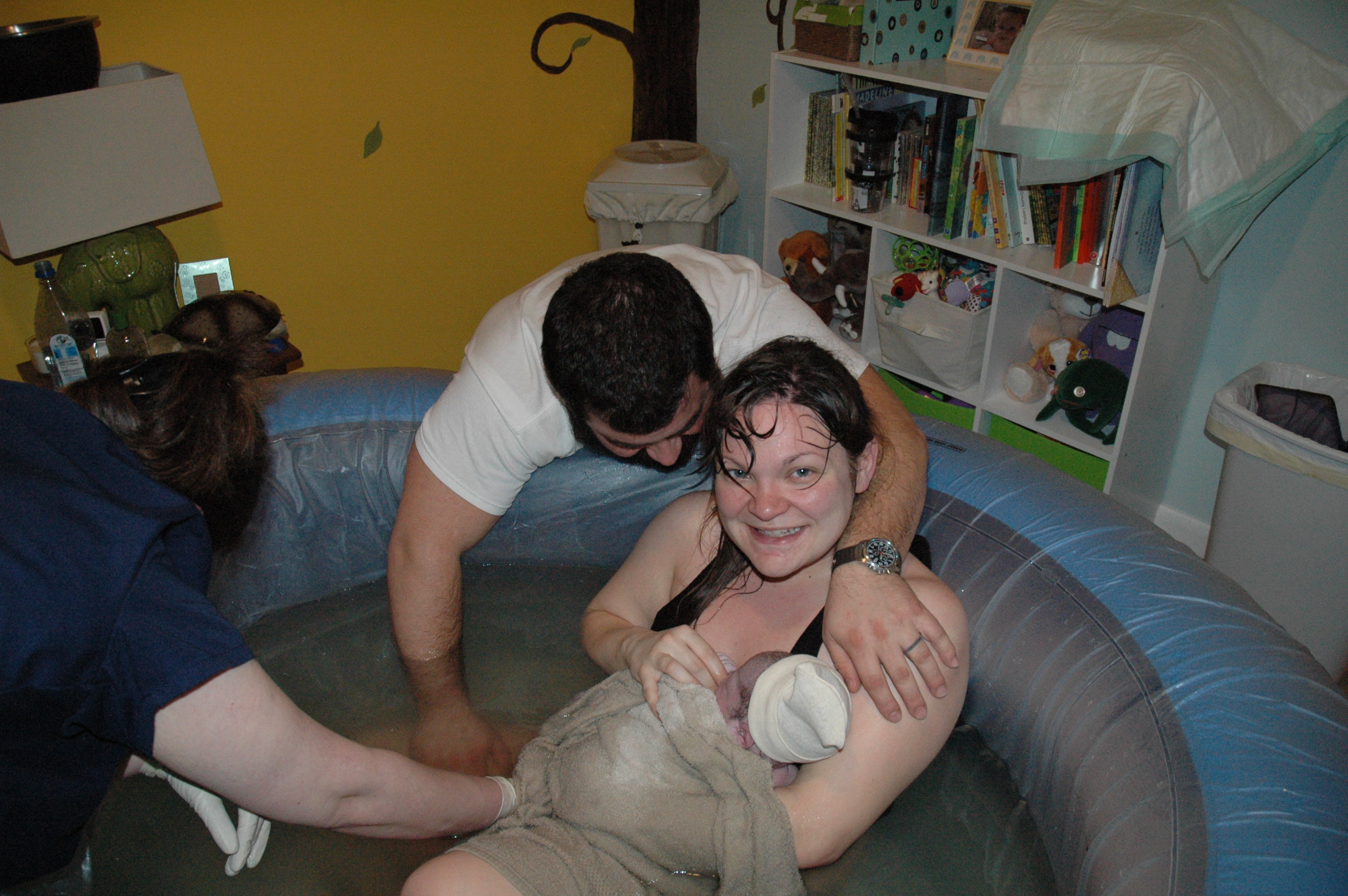 I hadn’t bothered to check what gender our little one was, I was too busy professing my love to him or her. Patrick was the one who yelled out, “It’s a little boy!” I will never forget the way he said that sentence as along as I live. That moment was the absolute best moment of my life, and we were both fairly tearful.

The rest of the night passed so quickly, the placenta came, I had to be catheterized, but no stitch-requiring tears, I had a shower, and little Waylon Nash got the hang of nursing right away. I couldn’t believe we were a family. Mary Anne and Lindsey were amazing, and if we have any more babies, I want Tender Beginnings to be there again.

As for Hypnobabies, I am so glad I went through that course. Not only did the time pass quickly, but all I felt was intense pressure in my pelvis region and lower back. Also, since you have to visualize your birth over and over again, mine went EXACTLY like I had envisioned. It was a beautiful and wonderful experience that I would not trade for anything, and that I would do again in a heartbeat. 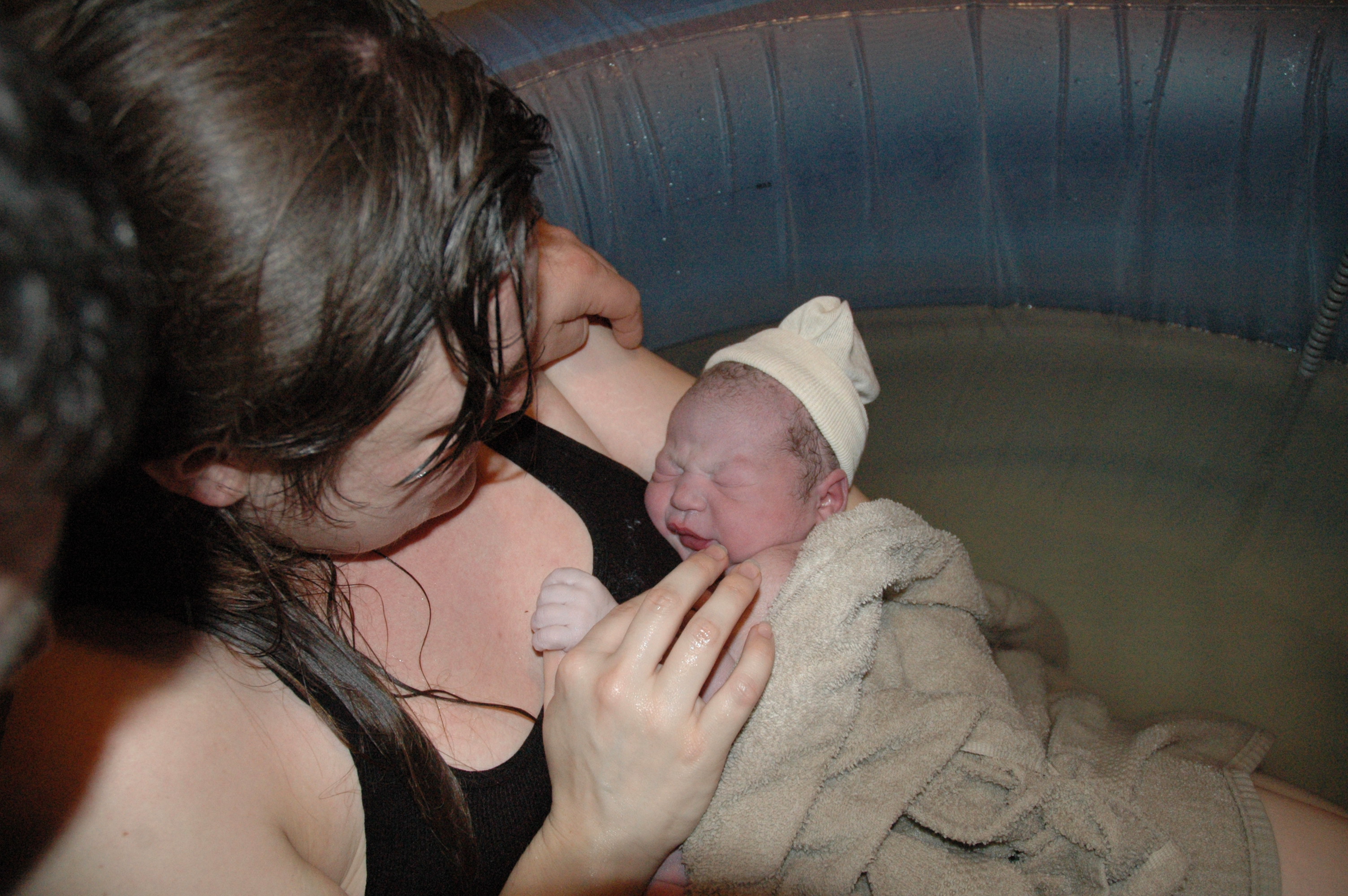 So that, in a nutshell, was Waylon Nash’s day of birth.