I discovered I was pregnant in mid-January of 2013, the day after my husband had accepted a promising new job. We were unbelievably excited. Following a tough year for our family, 2013 was looking so bright! After my son’s hospital delivery, I had always known that any subsequent births would be at home. Greyson’s arrival had been quick and uncomplicated, but not the unmedicated birth I had hoped for.

From the beginning of my first pregnancy, my desires for unmedicated birth had been met with skepticism and eyerolls. I was told it would be too painful and I would most certainly change my mind as soon as the contractions started. By the time I was ready to deliver, my frame of mind had changed from “I will have a natural childbirth” to “I want my son’s delivery to be as natural as possible.” With the seed of doubt planted, I went into labor with nagging fears of excruciating pain and complications. Early in the morning of April 27, 2011, I went into labor. It hurt, but it wasn’t unmanageable. I labored on my own for a few hours and proceeded to the hospital when the contractions started to get more difficult. Knowing what I now know about birth, I was experiencing classic hallmarks of transition at that time. I was shaking like crazy and really doubting my ability to cope with my contractions which were hitting me like a freight train! Unfortunately, I didn’t realize how very close I was to giving birth. I thought that there was no way I could handle 10 more hours at that intensity. I received pain medication (and plenty of it!) and my water was broken to keep the epidural from slowing down my labor. My son was born very shortly thereafter after only 6 hours of labor.

When the fog of new-parent sleeplessness had cleared, I realized that I could have easily given birth without medication and I truly wished I’d known how close I was. You see, in “transition,” the last phase of labor before the pushing stage, a mother will often have to cope with self-doubt. She’ll think that she can’t go on any further, that the intensity is too much. The beauty of transition is that it’s typically very short in comparison to the rest of the labor process. If only someone would have gently reminded me that I was about to cross the finish line!

With a strong lingering desire to birth naturally, I called Mary Anne only a few days after I discovered my second pregnancy. I had spoken to maybe 2 other midwives, but after my initial consultation I immediately knew that I wanted her to be my care provider. The months went on and I had a healthy, uneventful pregnancy. The fears and doubts I had with my first pregnancy were replaced with confidence and readiness. I prepared myself mentally for labor with the Hypnobabies home-study program (which is amazing for not only the expectant mother, but anyone coping with stress!) and felt confident that Mary Anne and her birth team would be in my corner helping me and encouraging me during the labor process. We were expecting a short, intense labor and as the days drew close I felt nervous. Mary Anne was so reassuring and always reminded me of how capable and strong my body is.

I was 3 days “post-dates” when labor began. I was getting anxious because my husband had a mandatory business trip planned less than 2 weeks from that time and I didn’t want him to miss our daughter’s birth. In the weeks leading up to my due date, I had some braxton-hicks contractions, but never any pain. I had no indication that labor would begin any time soon. At that point, I felt like I would probably be pregnant for the rest of my life. I had Mary Anne check me for progress and asked her to strip my membranes, but she was unable to do so because my body was not showing any signs of readiness. I left my appointment a little bit discouraged and resigned to the thought of eternal pregnancy.

My husband and I went to bed at exactly midnight that night. I was achy and having contractions but thought nothing of them until I realized that they were keeping me awake. A bit after 3 AM, I woke my husband and mother up and asked them to blow up the birth tub and prepare the room because I was beginning labor and didn’t want to have to deal with any of that later on. We called Mary Anne and told her that labor had begun, but we would contact her at around 5 or 6 AM and let her know if it was time for her to arrive. I wanted everyone to get some sleep since I thought we would have a lot of hard work ahead! My water broke immediately after I hung up the phone, but I wanted to lay back down and figured the birth team would be there in a few hours anyways. Anyone who is reading this – learn from my mistakes! Call your midwife back if your water breaks! Do not wait! I tried resting but wasn’t having much luck because I just couldn’t get comfortable. I sent my family back to bed and ran a hot bath. I relaxed and labored, employing some Hypnobabies techniques to temper my excitement in hopes of getting rest (since sleep obviously wasn’t going to happen). I contracted here and there with no real pattern, and then had one single contraction that absolutely took my breath away. I began to shake. I wrote it all off, since the contraction was painless. I figured the shakiness was due to hormonal changes. I still thought I was in early labor. Once again, I had missed the signs of transition! I changed positions in an attempt to get comfortable, knocking over some soap and shampoo bottles in the process. In doing this, I accidentally woke up my husband who came in the bathroom to check on me. As soon as he opened the shower curtain, I felt some intense pressure and in a panic, ordered him out of the bathroom! Mom rushed in at that time and I stood up, trying to rush to the toilet. All of a sudden, I had to PUSH! I couldn’t have stopped it if I tried. Mom ordered Brandon to call Mary Anne back immediately. Another strong contraction hit me and I reached down and felt a baby! At this point, there was no turning back. We had to deliver a baby, birth team or not. I pushed one more time 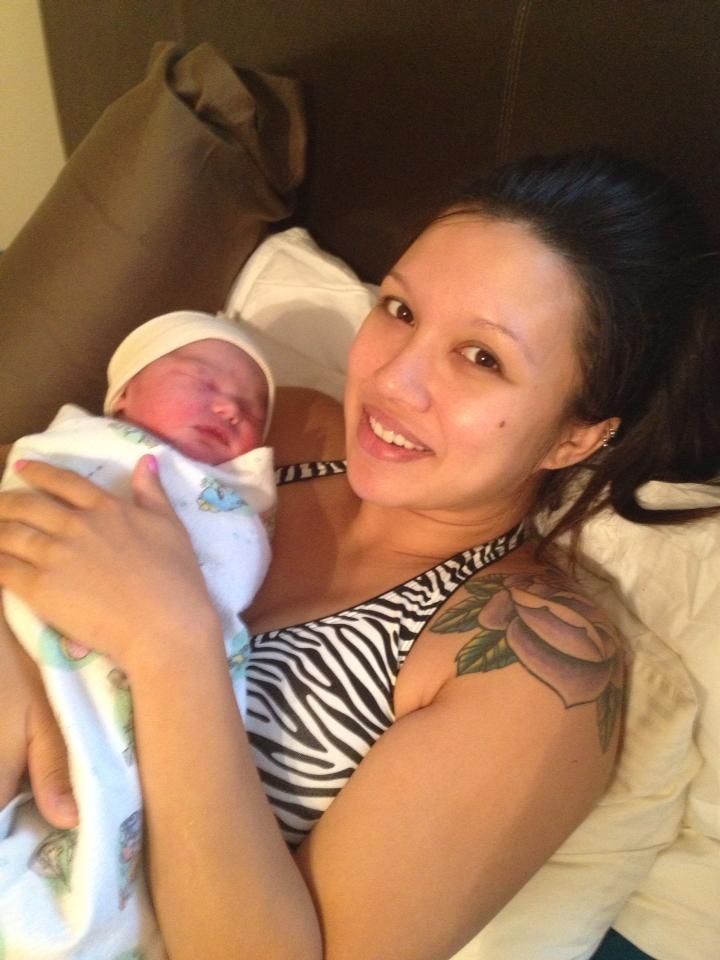 and my precious baby girl was delivered into her grandmother’s arms at 4:40 AM. I made my way to the bed and nursed her until Mary Anne arrived 15 minutes later. Violet Audrey Bluebird was a healthy 8 pounds and 12 ounces with tons of beautiful dark hair!

I felt powerful after this fast, incredible birth. My recovery was quite easy and the pain was very minimal, a big difference from my previous birth. I was so proud of myself for birthing naturally and blocking out all doubt and negativity. My body is strong, capable, and it did not fail me in any way! I was wonderfully surprised at what my body could do if I just listened to it and allowed it to birth my child the way it was designed to. I credit Mary Anne and her team at Tender Beginnings for giving me the guidance necessary for a healthy pregnancy and childbirth. I do not see her as just a care provider. She gave me the confidence and peace I needed in order to birth fearlessly.