On May 9th I went to bed with some cramping. It wasn’t intense or anything. I just assumed it was Braxton Hicks or my body just getting ready. I woke up on May 10th fine. I got the older girls on the bus and dropped my daughter Greeah off at daycare.

Around noonish I started to feel those cramps in waves. Matt had mowed the yard and he came in we were going to have lunch. I said boy these cramps are kind of intense when I do feel them! Since we were having a home birth, we had a list of supplies needed. We had gathered things and had everything in the back of the dining area. The cramping started to pick up how often they were coming, and I decided to start timing how often they were coming and how long with an app my midwife told me to use. At this point it was about every 20 minutes. (I still hadn’t acknowledged I was in labor, but I did realize they were indeed contractions) I then told Matt we needed to get the supplies and our bedroom prepared. As Matt was frantically getting things ready and tiding up the house, I continued to time the contractions.

Matt ended up picking up Greeah around 3pm, and the older girls got home around 3:30pm by that point the contractions were about every 7-10 minutes. They were really taking my breath away when I would have them and I really had to focus on breathing and not tensing up. (Note: It is indeed challenging to focus on breathing through contractions while a 2-year-old is climbing on you, telling a 9-year-old to get ready for practice and an excited 13-year-old is nonstop asking you if the baby is coming yet! ha-ha). By 3:45 Matt left with the 3 girls, dropped Hailey off at practice.

Since baby was past 40 weeks, we ate all of our “first meal post baby” food so Matt, Keaton and Greeah stopped at Costco before coming home. While at home I was having some pretty intense contractions. However, they were not the typical 1 min 30-second-long contractions. Some were lasting 45-30 seconds long.

I had never been “checked” so I had no idea how dilated I was. (With Keaton I got to the hospital at 4cm and 100% effaced and major contractions. With Greeah, my water broke and when I got to the hospital, I was 4cm dilated and 60% effaced. Based off my history, I just assumed I was around 4cm) I was very thrown off how much pain I was in so quickly as I had OVER prepared my mind and body for labor. I thought no way in hell I can do this all night long. I was really doubting myself.

I went to the bathroom & lost my mucus plug with a good ole bloody show. I called Matt and said get home now!! I called my midwife shortly after I called matt~ around 4:15pm. I sent her my contraction log I had been using. I had two contractions on the phone with her and I could talk through the first. They were ranging 3-6min apart and a lot lasting 30 seconds. It wasn’t your typical 5-1-1. She advised me to drink more water as it could be why they were so inconsistent. I started to cry a little, she asked what was wrong and I told her I was scared. I was just scared of the unknown and I was home alone. She was so supportive and sweet to me & stayed on phone just before Matt got home. He got home and we asked Keaton to help watch Greeah. I was really struggling and starting to doubt myself. (Again, in my mind I was a four and was thinking I had a LONG night ahead of me) I told Matt I made a huge mistake & I don’t want to do this. He told me I was so strong; I could do this, and I would regret this forever if I gave up. I told him, “No I f-ing won’t!” (Hahaha). I was having contractions it felt like every 3-5 minutes and they were so irregular with their duration. In between contractions I remembered Hailey!! I told Matt to call Cheris to have her pick up Hailey from practice. (Us moms never stop worrying about our kids!) Poor Matt. He was still tiding up and making our bed, hitting the timer on our app to record them every time I yelled “another one!” I was on the toilet laboring, just sitting helped me. I asked Matt to fill the master bath. As he was filling it up, he starts trying to clean off the bath bomb residue. I nicely (ha-ha, not) yelled “I don’t give a DAMN how clean this tub is! I need to get in NOW!!” LOL. I had a little regret getting in as my midwife had told me she waits until transition to have the moms get in. I didn’t “think” I was at that point, but as soon as I got in it was a little relief.

Midwife called back around 5:20pm to check in and Matt spoke to her. She told him she was going to come by to check on me. It felt like eternity waiting on her. I had Christian Hypnobirthing app playing and that plus Matt’s counter pressure on my back was helping me get through each contraction. I literally felt like I was getting a beating and I felt like I was not getting any relief or a break before the next one started. She arrived around 5:50pm. I remember looking up and telling her I was sorry. She said for what? I said I know you want your mothers to wait until transition to get into the tub. She laughed and said oh honey, I think you are further along than you realize. She asked if I wanted to be checked. I told her yes. Her and Matt helped me out of the tub and while walking over to the bed I fell to the ground and had two more contractions. Matt was literally planking on my back and the pressure was helping. When we got on the bed, she checked and said you are a 9cm and there is baby’s head! I felt relief. And shock!! She immediately calls her team. Tells Matt to get me back in tub. Matt said should I fill up the birth tub? She said we do not have time. At 6:10pm an assistant arrives. 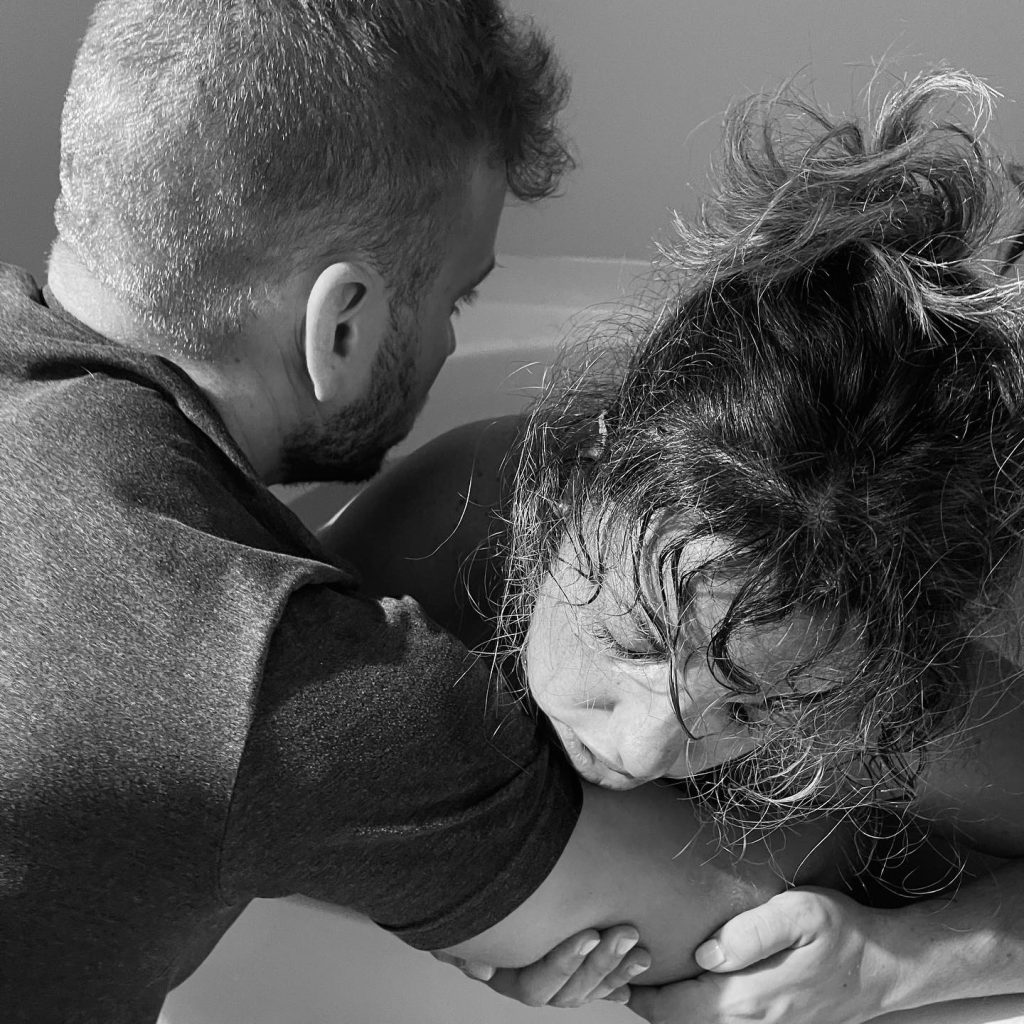 I’m laboring in bath, leaned over & grabbing Matt’s arm. I told Midwife I don’t want to do this & I am scared. She told me suck it up buttercup, you don’t have a choice. Thousands of women have given birth before. Ha-ha. I asked how much longer. She said very soon. She told me the hard part was over and I would meet my baby very soon. She told me pushing would feel better. At about 6:15pm the second midwife/assistant arrives. My body started to push on its own. I was trying so hard to relax. I felt a pop. My water broke. I felt a burning sensation. I thought I was tearing. (Found out later I did not) Midwife then tells me when I feel the need to push, just push. I was confused what that meant, but then it just came so naturally. 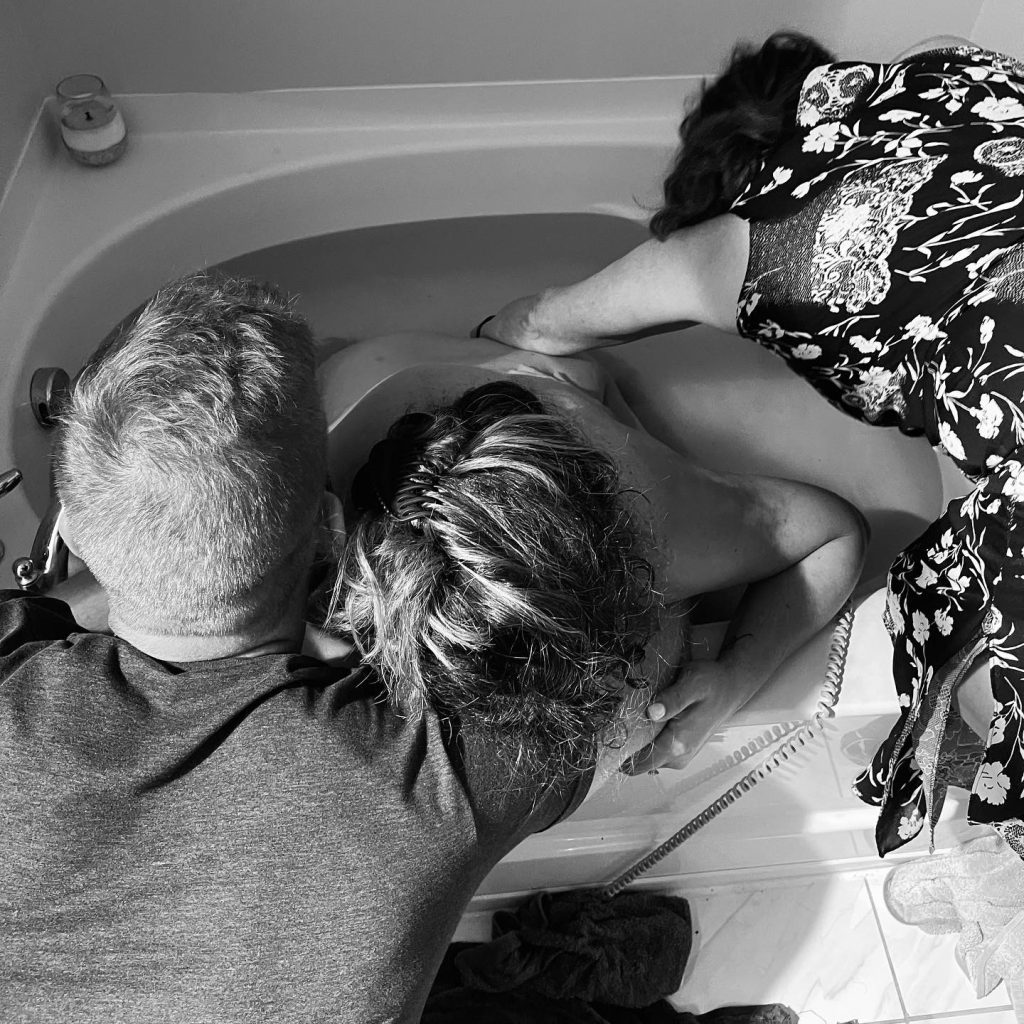 My body was pushing on its own! (Here to say that Fetal ejection reflux is very real!) She was telling me to push when I felt the need. I started to, but my pushes were weak. I just felt like I had no strength. She said you have to push a good long push for her to come down. The next contraction I did just that. I felt her head going further down. I think maybe two more times I did those pushes. By the 3rd time I knew this was it. I just pushed with all I could and felt her head come out. I waited another second, or minute- I have no idea. (Keaton later told me she heard me screaming & it sounded like I was being stabbed. She said Greeah kept saying “Mommy hurt, Mommy hurt.” Keaton told her Mommy is having her baby & she said Greeah started to giggle! “But I gave another push, and her body was out at 6:27pm. 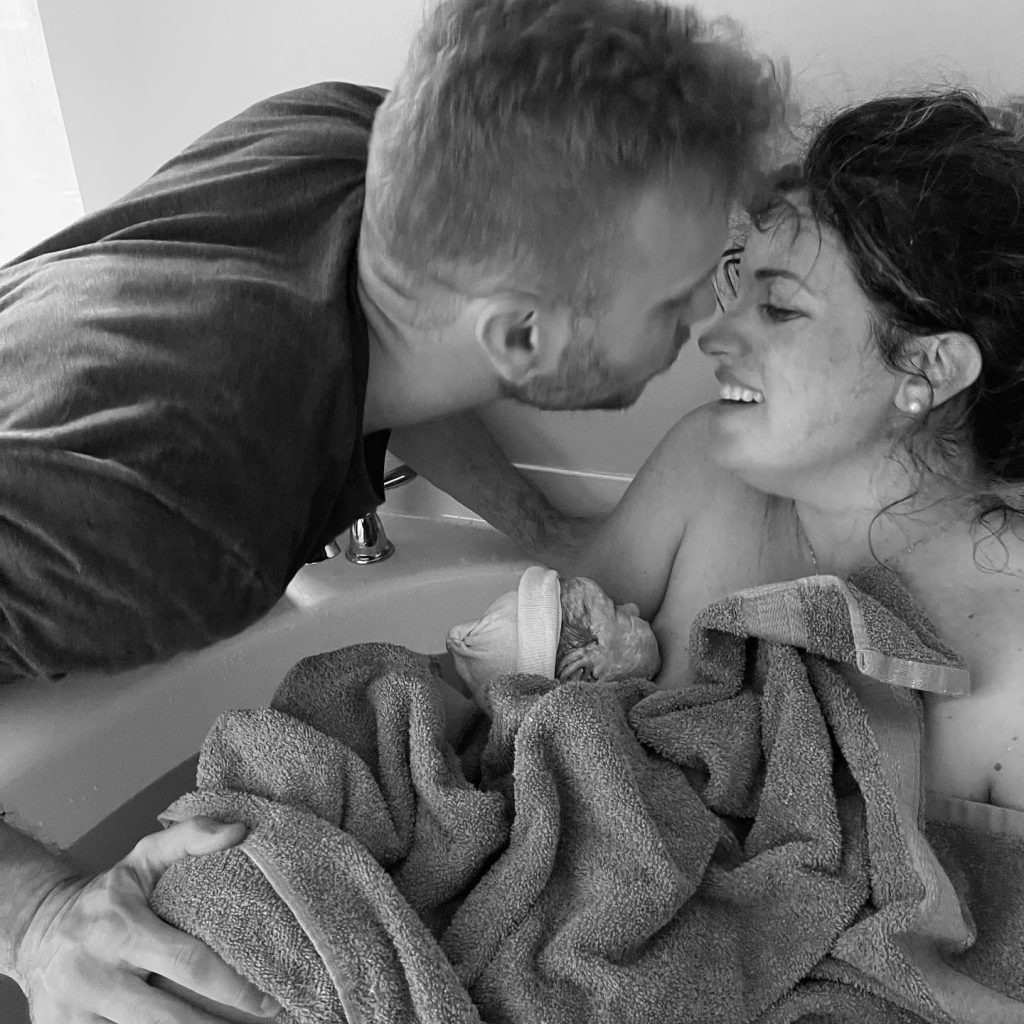 We got out of the tub, and I delivered the placenta shortly after on the bed. We had our “skin to skin” alone time while they cleaned up & helped get my first meal. 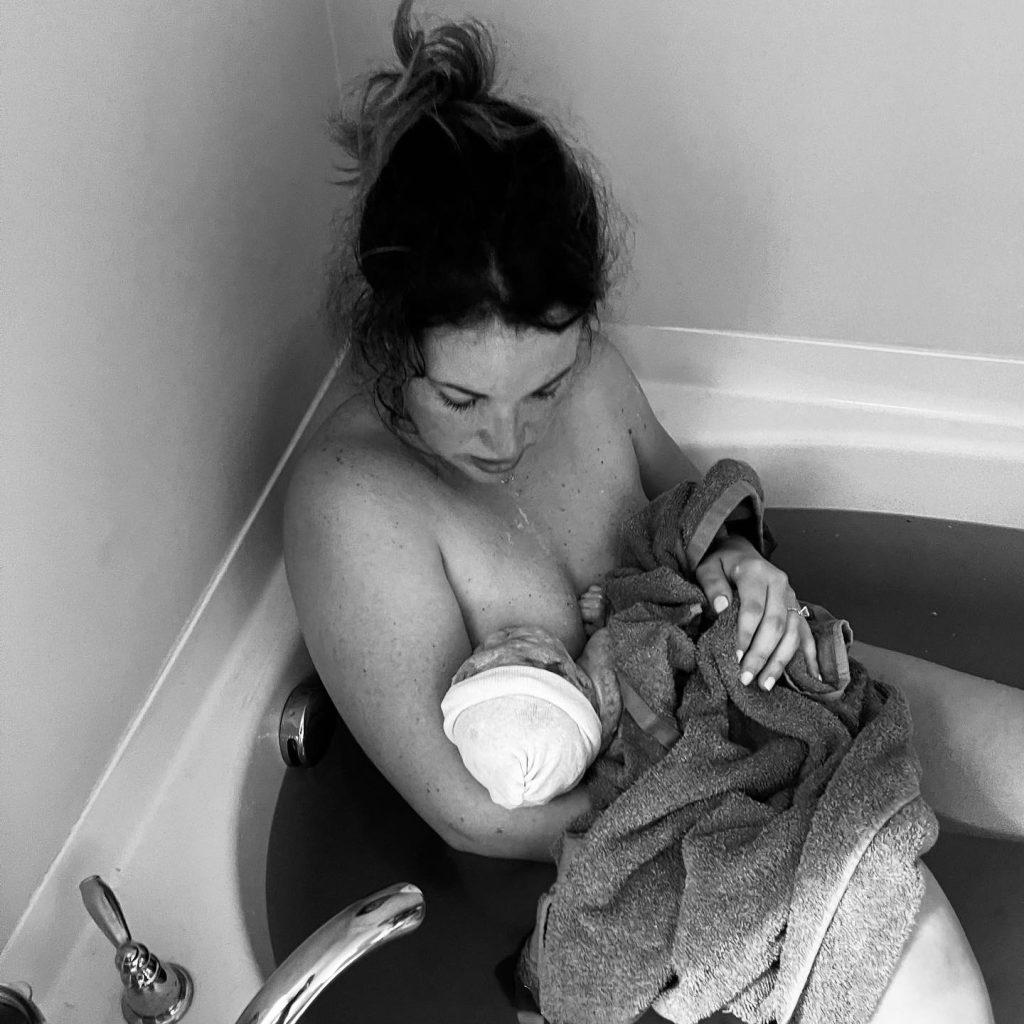 Despite the chaos, it was incredibly peaceful and intimate. If I could’ve done it all over again- I would have had all my girls at home. I’ve never felt safer and more comfortable in my home with my incredible Midwife. It wasn’t how we “planned.” We didn’t get to use the birth tub we rented with the pretty curtain lights behind it. But it was perfect the way it was! 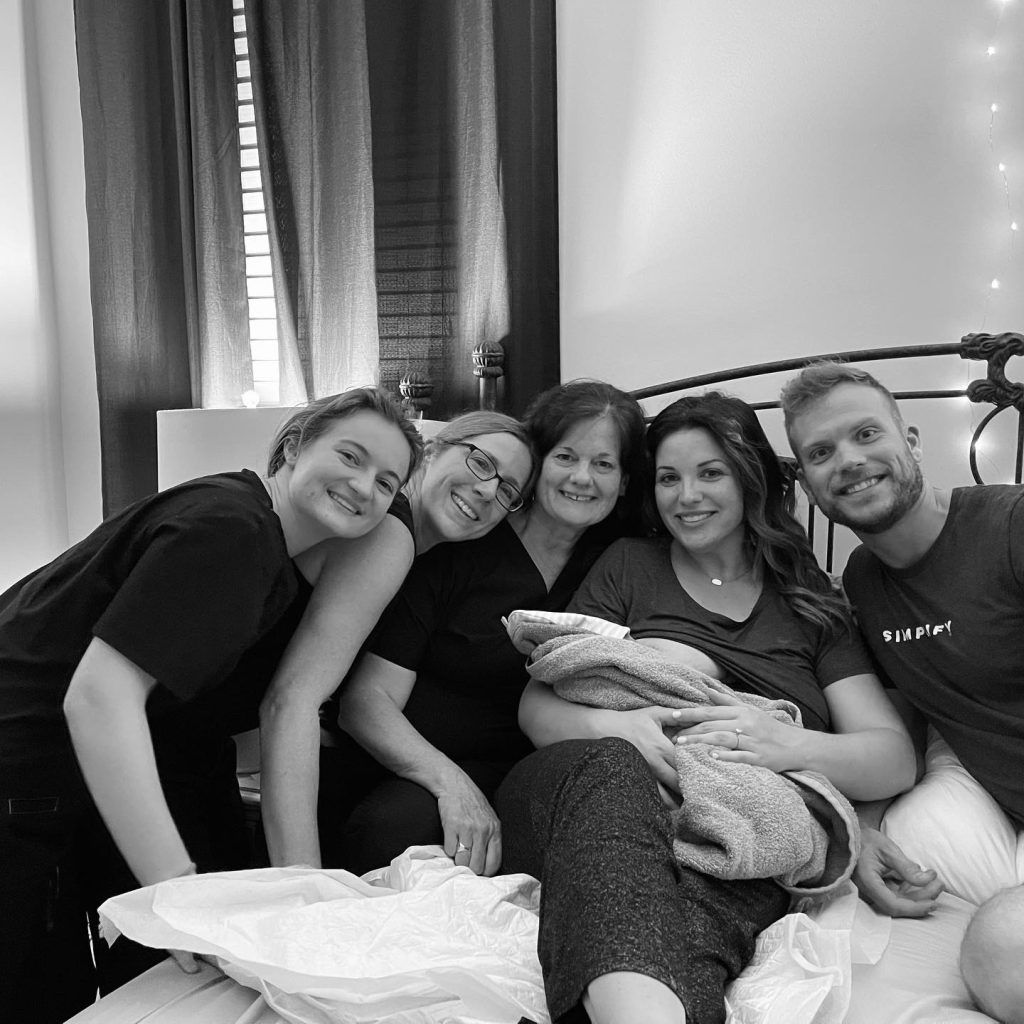 PrevPreviousI wouldn’t change a thing, and I hope to do it over again!!
NextLucy’s Birth, a Powerful StoryNext